On the 10th of December, the 2019 A.I.Virtanen Prize was awarded to Academy Professor Tapio Salmi from Åbo Akademi in recognition of his pioneering research in the field of chemical processes, catalysis and kinetics.

The A.I.Virtanen prize, named after professor Artturi Ilmari Virtanen, who received the Nobel Prize in Chemistry in 1945, was now awarded for the 19th time. The prize is awarded by the Finnish Chemical Society, the Foundation for Nutrition Research and Societas Biochemica, Biophysica et Microbiologica Fenniae to a Finnish or a foreign scientist, who has significant
achievements in the fields represented by the aforementioned societies. Special attention is paid to broad-minded, still scientifically active nominees. Interdisciplinary approach to research is also highlighted.

Read more about professor Tapio Salmi and his meritorius research: https://kemia100.fi/tapio-salmi/ (in Finnish) and http://web.abo.fi/fak/tkf/tek/kincat.html. 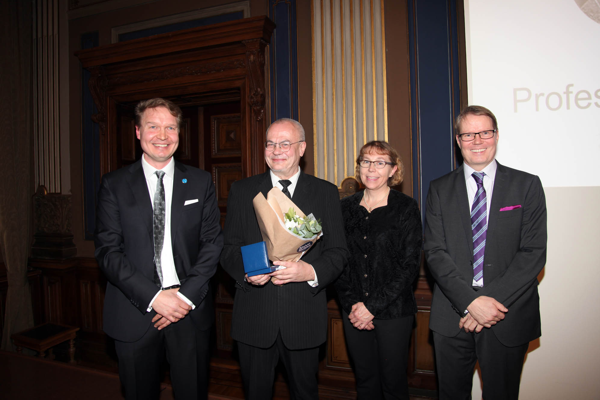 The A.I. Virtanen Prize was awarded to Tapio Salmi (second on the left) at a ceremony held at the House of the Estates December 10, 2019. Award was given by the chairs of the Finnish Chemical Society Pekka Joensuu (first on the left), Anu Turpeinen from the Foundation for Nutrition Research and Hannu Koistinen from the Biobio Society. Photo: Finnish Chemical Society. 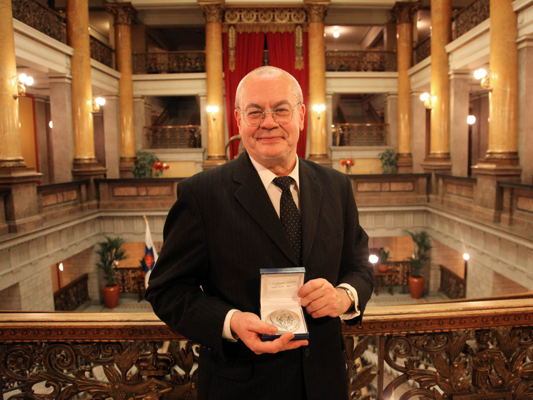 The prize, designed by sculptor Aimo Tukiainen, was awarded for the 19th time. Photo of Tapio Salmi: Finnish Chemical Society.